Those that meet the following conditions will acquire Korean nationality at the time of their birth:

i) Those whose either parent was a Korean national at birth;

iii) Those born in Korean while both parents’ nationality was either unclear or nonexistent;

iv) Abandoned children that were found in Korea;

v) After June 14,1998 which is the effective date of current nationality act, those who has at least one Korean parent are automatically granted Korean nationality from birth, regardless of their decisions on whether to choose the nationality of the foreign parent or the country of birth (if born outside Korea);

vi) However, should such children’s birth be declared only to the foreign parent’s country or the country of birth (if born outside Korea), but remains undeclared to Korea until their 22nd birthday, their Korean nationality will automatically be canceled due to the nationality selection system. At this point, family register cannot be made simply with declaration of birth, and special naturalization must be granted in order for them to gain Korean nationality.

Pursuant to revised Nationality Act, except for special cases, foreigners shall have F-5 visa before applying for general naturalization.

i) You must be legally adult based on Civil Act;

ii) You must have good conduct;

iii) You must have the ability to maintain living on your own assets or skills; or is a dependent member of a family capable of the supporting itself;

iv) You must have basic knowledge befitting a Korean national; such as understanding of the Korean language, customs and culture.

iii) Those that married a foreigner and gained the nationality of the spouse:

- Those that were adopted and gained the nationality of their foster parent;

- Those that gained the nationality of foreign parent through his/her recognition;

iv) Those that lost Korean nationality due to acquiring a foreign one, but does not know the exact date of acquisition, it will be defined as the date a foreign passport is issued to them.

3) Discontinuation of Declaration of Nationality:

4) No Willingness to Maintain Korean Nationality:

1) Foreigners that had Korean nationality in the past:

i) Those that lost Korean nationality through reasons stated to Nationality Act (A Korean Foreigner);

ii) Those that renounced their nationality as a person with dual nationality;

iv) If the domestic family registry is still intact at the time of reinstatement.

- Those with foreign nationality that still have a valid family register must first cancel the register by reporting loss of nationality, then re-add themselves after reinstating their Korean nationality;

- Even if their family registry was intact, since obtaining foreign nationality automatically invalidates the Korean one, the family registry merely represents an inaccurate record, and cannot be used again;

- In such cases, the affected foreigners must simultaneously declare of the nationality and apply for reinstatement of nationality. If the register already records the original loss of Korean nationality, then there is no need to declare loss of nationality;

v) In such cases, the affected foreigners must simultaneously declare of the nationality and apply for reinstatement of nationality. If the register already records the original loss of Korean nationality, then there is no need to declare loss of nationality. 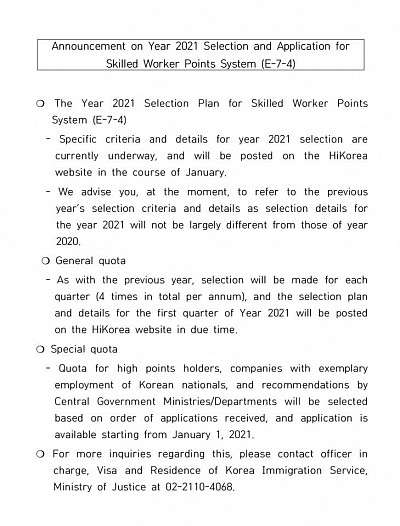 2021 E7-4 visa Information_Points based Skilled Workers’ VISA 숙련기능인력 점수제 비자
It is under consideration so you may refer to Q4 2020 criteria.
Higher points application (special quota) will be started from Jan. 1, 2021.
General quota is the same as 2020 before the final criteria is released.
#expats #foreigner #foreign_worker #e74visa #e7visa
Read more ...

Restriction of renunciation of nationality after the age of 18 for multiple nationalities is inconsistent with the constitution_https://youtu.be/CqLLiLspYYs
The Constitutional Court decided that the provisions of the Nationality Act would be contrary to the Constitution to prevent multiple nationalities over the age of 18 from giving up their Korean citizenship and choosing foreign nationality when they failed to resolve the military service problem.
VISA in KOREA NEWS
#expats #dual_citizen #multiple_citizenship #constitution #renunciation_of_nationality #foreigner #overseas_Korean #국적이탈 #국적법 #헌법재판소 #헌법불합치 #visainkorea #장행닷컴

Guidance on Processing Period of Examination of Naturalization (Nationality) for reference.국적업무처리기간 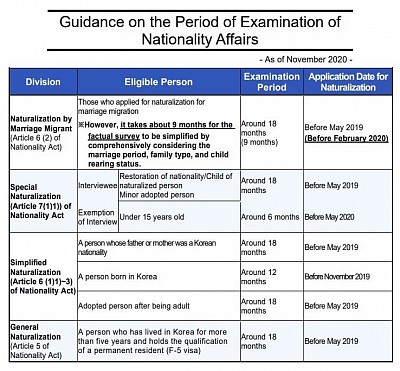 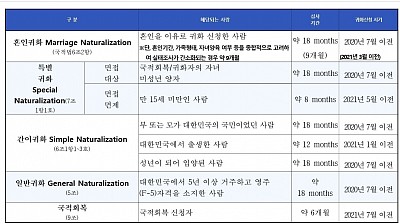 This site uses cookies to offer you a better browsing experience.
You can accept them all, or choose the kinds of cookies you are happy to allow.
Privacy settings
Choose which cookies you wish to allow while you browse this website. Please note that some cookies cannot be turned off, because without them the website would not function.
Essential
To prevent spam this site uses Google Recaptcha in its contact forms.

This site may also use cookies for ecommerce and payment systems which are essential for the website to function properly.

Google Services
This site uses cookies from Google to access data such as the pages you visit and your IP address. Google services on this website may include:

- Google Fonts
Data Driven
This site may use AddThis:
- AddThis is a social widget which collects and shares user behavior with third parties.